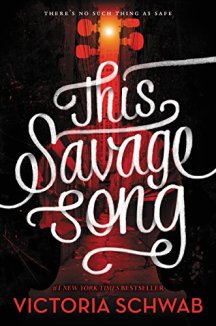 THIS SAVAGE SONG is so much more than an incredible title. Schwab’s question of what defines a monster is pushed to its limits in this inventive paranormal. Kate, a teenage girl, fights for acceptance from her criminal father while August–a monster who takes the form of a teenage boy–fights to control his hunger.

Here’s the blurb from Goodreads.com:

There’s no such thing as safe in a city at war, a city overrun with monsters. In this dark urban fantasy from author Victoria Schwab, a young woman and a young man must choose whether to become heroes or villains—and friends or enemies—with the future of their home at stake. The first of two books.

Kate Harker and August Flynn are the heirs to a divided city—a city where the violence has begun to breed actual monsters. All Kate wants is to be as ruthless as her father, who lets the monsters roam free and makes the humans pay for his protection. All August wants is to be human, as good-hearted as his own father, to play a bigger role in protecting the innocent—but he’s one of the monsters. One who can steal a soul with a simple strain of music. When the chance arises to keep an eye on Kate, who’s just been kicked out of her sixth boarding school and returned home, August jumps at it. But Kate discovers August’s secret, and after a failed assassination attempt the pair must flee for their lives.

What immediately set this book apart from other YA paranormals I’ve read recently is that there is no romance plot. Though I love romance, it was refreshing to read a book in this genre that didn’t automatically go that route just because two teenage characters are thrown together into dire circumstances and had plenty of alone time for kissy scenes. Kate and August don’t need a romantic relationship to know each other at the deepest levels. Each holds a mirror up to the other, girl to monster and monster to girl.

August is, at first glance, the farthest thing one could imagine from a monster. He has a poet’s soul and a near painful level of empathy. Regardless, his basic nature makes him a dangerous–a hollow hunger that, if not satisfied, could lead to a catastrophic loss of control. August is a “Sunai,” a paranormal being that seems a blend of siren and demon.

There are other monstrous beings in the story as well. Malchai have traits that remind me of vampires, and Corsai seem sort of like shapeshifters.  I think what Schwab has done is really smart. Many readers are tired of the more classic paranormal creatures, but Schwab was able to take the basic elements of those ideas and spin them into something all her own.

That leads me to the next and probably best part of this book–the world building. Schwab’s world is essentially a dystopia plagued by monsters. The city our main characters are living in is a Berlin of sorts that may fall once again into territory wars. In the midst of this, we have two teenagers (well…one might dispute that fact about August) from opposite sides of the wall who click despite their differences. These two grow to rely on each other when those they trust turn against them…when nowhere in the city is safe.

I hope you pick up this incredible title and check out more on Victoria Schwab’s website.

5 thoughts on “THIS SAVAGE SONG by Victoria Schwab”