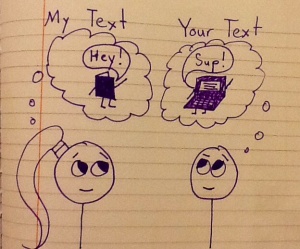 I don’t write negative book reviews.  My reasons for this are mostly selfish.  Perhaps one day I’ll be lucky enough to get published and a hypothetical bunch of people will write somewhat flattering reviews of my book…though I suppose scathingly harsh reviews wouldn’t be so bad (because, as the cliché goes, there’s no such thing as bad publicity).  But writers hope for good reviews since they’ve struggled to send that over-edited block of textual thought (which is, in the end, a rather solid abstraction of the fluid, unattainable work of the imagination) out into the universe…and they’re hoping to see ripples come back.

My husband once asked me, “Why is it so important to you that you get published?” The question stumped me.  I had plenty of reasons for writing–some selfish, some not– but publishing is more an issue of connectedness.  I don’t want fame.  I want people to have read my words, empathize with the characters, lose themselves a little bit in their lives, and be haunted by the ghost of the book even after they turned the last page.  I want them to think about it later.  That would mean something in the essence of the book moved from short-term enjoyment to long-term effect.  I want to–as corny as it sounds–move someone.

They say art is a mirror to life–that we react to books and paintings and music and other abstractions with the essence of the human element in them because we see something of ourselves.  So…if I make art, does it count as art if nobody is there to experience it?  (Insert tree falling in the woods metaphor here!)  Well, I suppose, I am reading it.  I see surprising bits of myself in my writing and react to them, so I guess there’s that.  But how much more cool is it to know that someone else read your human bits and are approximating the same thing that you are–that they are also human and their humanness is reacting to your humanness.  Fire catching fire.

And what if someone who read my book was kind enough to write a review?  That review would be another block of textual, abstracted, thoughty bits, but in it, I might see evidence of the fire I set.  And I guess that would make me feel…warm. 🙂

33 thoughts on “Why I Want to Be Published: A Somewhat Meta Review of Reviews”